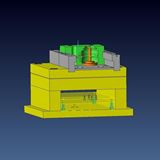 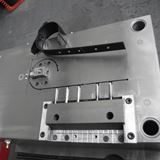 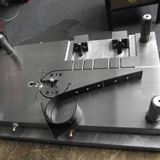 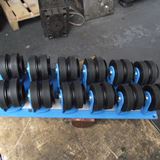 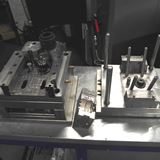 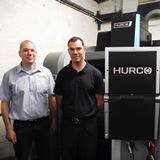 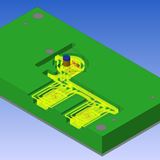 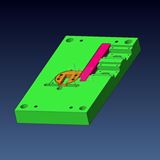 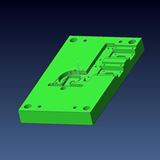 “Some complex mould tools used to take me nearly a week to design. But when we invested in VISI that immediately came down to a couple of days. And it’s even quicker now.”

Those are the words of Mark Chapman, company secretary and mouldmaker at family-run business Sharnold Ltd. Designing their moulds in VISI, and machining them with toolpaths generated by WORKNC, ensures that the tight tolerances they need to achieve are met first time, every time.

“CAD designers are producing increasingly more complex parts, but VISI gives us the ability to meet those demands quickly and easily.”

The company was established as a subcontract mould maker in 1957, moving to their current 3,500 square foot premises in Northamptonshire, in 1970 with ten employees. Nowadays it is run by just four people: Maurice Chapman, his two sons Mark and Stephen, and Stephen’s wife Tracy. Maurice bought into the business in 1982, eventually taking sole ownership.

While making tools for plastic injection moulders remains an important part of their business, they set up their own moulding operation in 2000, and now have seven moulding machines – two Boys, two Battenfelds and three Arburgs. The machines mean the company has a locking force of between 22 and 100 tonnes, giving them the ability to supply moulded plastic parts up to 230 grams.

While they have used WORKNC, from Vero Software, to machine their moulds for at least 15 years, VISI…also from the Vero stable…is a relatively new investment.
“It’s already proving to be vital for us,” says Mark Chapman. “CAD designers are producing increasingly more complex parts, but VISI gives us the ability to meet those demands quickly and easily. It’s now simple to achieve aspects that we struggled with before. For example, producing split lines is much easier, as is slide generation. VISI has speeded up the whole design process considerably.”

The combination of mould design with VISI, and WORKNC driving a 3-axis Hurco VMX machining centre along with a Hurco Hawk and XYZ bed mills, means that everything Sharnold produces is within the required tolerances…sometimes down to + or – 0.05 of a mm. “Every mould we manufacture goes through both software packages. Using the Hurco machines and VISI means that in terms of design and cutting the forms, we save at least half the time…and the overall time taken to produce the complete tool is reduced by around a third.”

He says their process begins with the plastic component – whether they are producing the tool for another moulder, or to run on their own moulding machines. “A big advantage of VISI is that we can check the model’s integrity before we start. It’s got a variety of tools to ensure that all surfaces meet up, because if we’re trying to work with a poorly designed model, the mould tool won’t work.

“I check the features with the draft analysis function, making sure it has relevant draft tapers, and then move on to the design. As VISI has a large library of materials with all their specs and characteristics it’s simple to apply shrinkage to the particular plastic I’m working with.”

And he says core and cavity separation is quick and easy, even with varied split lines, as are sliding block and tricky shot out areas. “I make either the fixed half or moving half transparent onscreen, so I can look inside and ensure the faces are touching, and that everything fits and works properly.”

Once he is happy with the split he subtracts the part out of the inserts and establishes the insert size around it. While VISI automatically picks the mould base when the insert and part are complete, he is particularly impressed with the speed and accuracy it can be manually tailored if required. “And when working on multi-cavity tools VISI lets me literally copy a completed insert into the next position, and when that operation’s finished it automatically selects the bolster – and, again, there are manual editing tools if necessary.”

He says the feed gate generator and library of ejector pins all help to move the design along at a fast pace. And transferring from VISI’s CAD process to WORKNC for CAM is also fast and seamless. “I put each plate on a different layer, so l have my clamp plate, the fixed half form plate and the moving half form plate all saved as individual parts in native VISI files. As WORKNC reads the VISI files, I simply move them across. I can pull a finished plate design out of VISI, and WORKNC is generating toolpaths for it within a minute.”

Sharnold’s moulded parts are largely for the automotive, security door, electronics, conveyor belt, licensed trade, and airport industries. They include a brewery “Python” strap, and a pulley wheel system for a conveyor belt.

The Python strap is used for securing pipework leading from pub cellars to the taps on the bar. It comprises reground plastic waste from other manufacturing processes. Once they had been briefed on the project by Dirk Parker, from their Leicestershire-based customer L’isolante K-Flex, they used VISI to create the mould tool from an existing part which was previously manufactured using a different method.

And the contract for the pulley wheel system came about after producing a small clamping block for Axiom GB. “We made around 5,000 parts, which was their first venture into moulding. It was so successful that they asked us to work on the wheels for their conveyor system. We designed the full mould in VISI and transferred the files to WORKNC for machining the bolster, forms and electrodes.”

“Not bad for just the four of us,” concludes Mark Chapman. He and Stephen, along with their father Maurice, work on the design and toolmaking operations, and Tracy handles the administration work.

“Some complex mould tools used to take me nearly a week to design. But when we invested in VISI that immediately came down to a couple of days. And it’s even quicker now.”